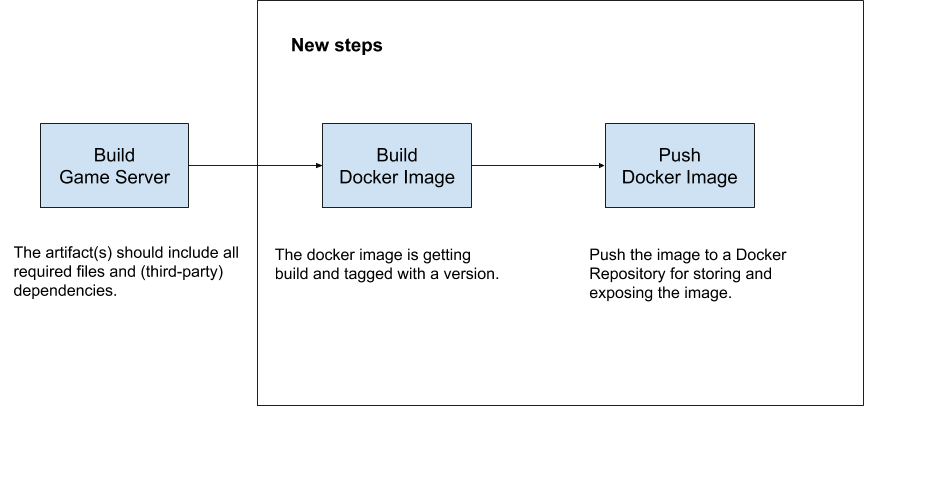 We can support any Linux flavor if needed, but currently, we recommend choosing an OS from the list below as our packages are pre-build for these releases. Please contact [email protected] if your flavor of choice isn't on the list.

Your build pipeline should produce a game server executable including all files and dependencies that are required for the game server to start successfully, such as third-party libraries like Steam or anti-cheat services.

The entrypoint refers to the executable that will be started when a container is booting up.
In this case, we won't point directly to the game server executable but to a tool called igniter.

It's opensource and can be found on Github

Docker builds images by reading instructions from a Dockerfile. A Dockerfile is a text document that contains all the commands a user could call on the command line to assemble an image.

You can also build an image with multiple tags:

It's required to push an image with a unique version tag, we recommend using your internal build number for this.

Before we can push images to a Docker Hub repository we first need to authenticate.
This is done via docker login:

Push the image to Docker Hub:

As the image can be several or even tens of gigabytes big, it's recommended to run on the image push job on a machine with a high-speed upload connection.

For Docker Hub, you can add the following webhook URL: https://image-updater-docker-hub.gameye.com/webhook

When the first server has been populated with the new image this automatically considered the new "live" version of the game. A image of 5GB takes around 1-3 minutes to be downloaded and extracted,
depending on how close they are to the CDN endpoints.

When the image is pushed successfully to Docker hub we need to set up access management so that Gameye is able to pull the image.

For this, first, you need to create a team. When you have a team, you can add Docker hub accounts to it. Next, the team needs to have permission to access the repository. Read-only permission is sufficient.

Please contact [email protected] to request the Gameye Docker accounts that need to be added to the team.

Separating development and production builds can be accomplished by setting up two different Docker repositories and pushing the different builds to their respective repo.

Gameye will supply a separate gameKey and API token the second repository.